Below compares the performance of Gold, Silver and the S&P 500 since July of 2001. Why compare the performance of the three starting in 2001? This is when Gold & Silver created a series of higher lows, starting a new bull market that lasted the following decade. From 2001 until 2011, Gold & Silver both outperformed the S&P 500 by more than 500% each! 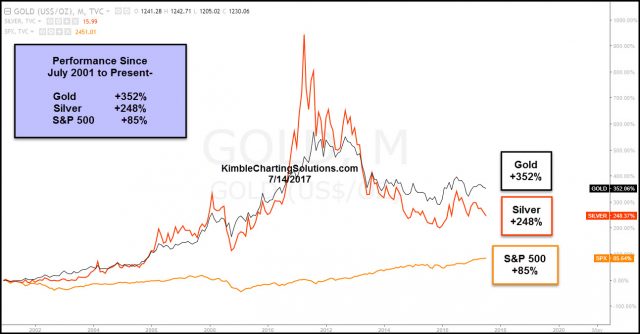 No doubt it paid to own Gold & Silver over the S&P 500 from 2001 to 2011. As we all know at this time, the performance between the three has done the exact opposite over the past 6-years, as it has paid to own the S&P and avoid Gold & Silver.  Is in now time to consider that Gold & Silver could be ending the 6-year bear market in metals?

Below looks at only Gold & Silver since the late 1990’s and why the price point in Gold & Silver are testing what could be historically important levels. 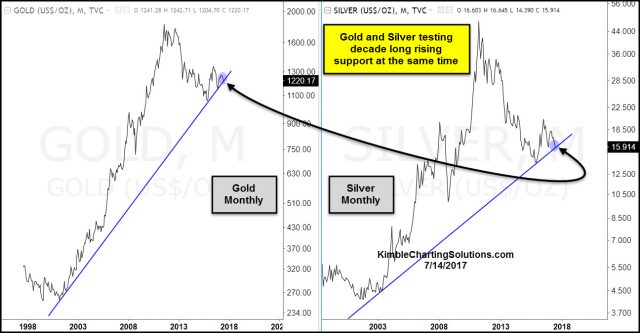 The above chart reflects that Gold & Silver on a monthly basis are both testing 16-year rising support at this time. Despite Gold & Silver being lower over the past 6-years, this reflects that both are in long-term rising trends, where support is being tested.

Joe Friday Just The Facts; Support is Support until broken and both are testing long-term support at this time. What both do at this support test should send very important long-term messages about the metals space and will lead to wonderful opportunities.

If you would like to receive Power of the Pattern charts in the metals sector, you can receive them by being a Premium or Metals member.