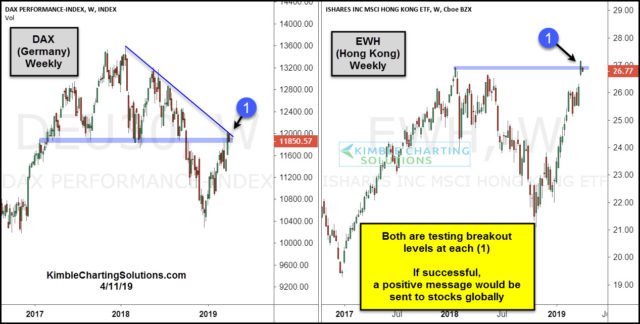 The steep correction in the U.S. stock market reverberating around the world, as several stock market indexes fell in unison.

Some markets corrected more than others. And most markets are now rallying, along with the U.S. stock indexes.

But the rally off the lows means more to investors when we see major resistance taken out in the form of a breakout.

Today, we look at two global stock indexes that are testing breakout resistance levels: The German DAX and Hong Kong (by way of its ETF – $EWH).

The German DAX was hit very hard and has been a laggard during the global stock market recovery/rally phase. BUT, it’s testing it’s downtrend resistance line (1). And a breakout would go a long way in stabilizing the European markets.

As well, the Hong Kong ETF is testing its 2018 highs (1). A breakout here would be bullish for EWH investors.