Homebuilders About To Break Support And Send Negative Message About The Economy? 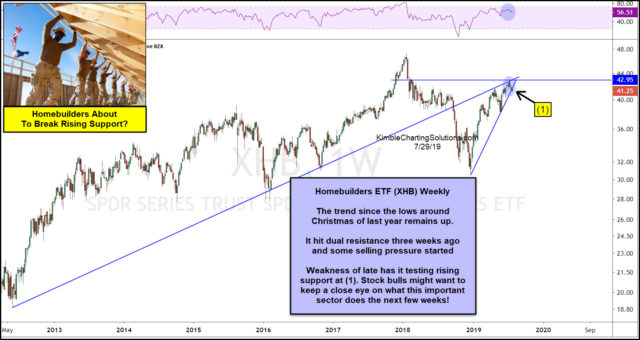 Sometimes the ole phrase “So Goes Homebuilders, So Goes The Economy Is True!”

This chart looks at an important sector of our economy, which is the Homebuilders ETF (XHB). The long-term trend remains up, yet over the past year, it is experiencing a negative divergence to the broad market as it remains lower than the highs of last 2017.

The rally of the lows around Christmas of 2018, saw it test dual resistance a few weeks ago. As it was testing resistance, momentum was reaching lofty levels and could be rolling over.

After hitting resistance, XHB has seen some selling pressure take place, pushing it lower. The weakness now has it testing rising support off the Christmas lows at (1).

If XHB would happen to experience more selling pressure and support breaks at (1), this important sector of the economy would be sending a caution message to stocks.

Keep a close eye on this sector over the next few weeks friends, as it could influence the broad market as it is near all-time highs.