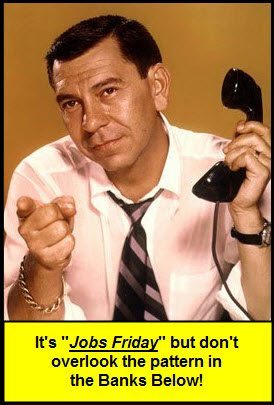 It’s “Jobs Friday” as we await the call per the employment report in a couple of hours.

Joe Fridays says…Jobs are very important for sure… don’t over look the importance of banks and the patterns they have created over the past few years in the charts below!!!

The Bank index (BKX) and Financial ETF (XLF) both find themselves at their 38% Fibonacci retracement level of the financial crisis and have created bearish rising wedges that two-third of the time suggest lower prices are ahead.

Joe Fridays says….Job’s Friday is important!  Just as important is how the Banks handle these patterns in the 2-pack above.  So Goes the Banks, So Goes the S&P 500.  It would be good for a good employment report to come out in a couple of hours, it would be even better for the economy if Banks would break to the upside!

The 3-pack above reflects that Copper and key interest rates are breaking key support, potentially reflecting a global slow down.  The break of support of these three above makes the upcoming price action of the banks all the more important!!