If you see the left side of an Eiffel Tower pattern, you often end up experiencing the right side of the tower too!

I also shared that Apple looked to be forming an Eiffel Tower pattern as well (Apple Eiffel pattern).

Both Apple and Gold, which were darlings of the street at the time of the Eiffel tower pattern posting, each lost 30% in value in upcoming months! 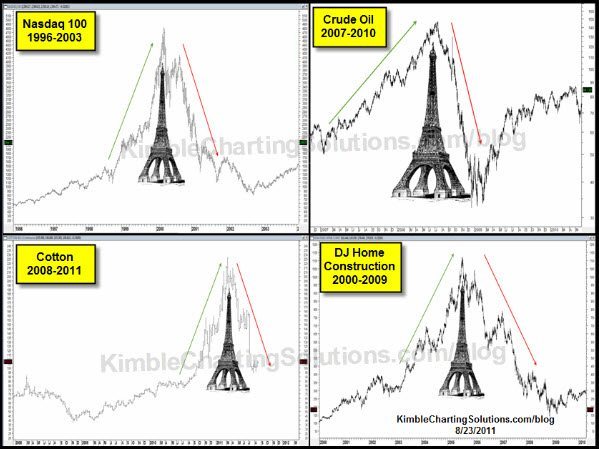 Now back to the current situation…Over the past two years, Consumer Staples (XLP) and Consumer Discretionary (XLY) have reflected a ton of relative strength over the S&P 500, doubling SPY from May 1 2011 to May 1 2013!

The top chart reflects that XLY & XLP are up against resistance lines that have seen important declines for these two over the past 9 YEARS! At the same time these ETF’s are facing resistance, they might have formed Eiffel tower patterns. Many found it hard to believe last fall that Apple could be forming an Eiffel tower pattern, yet after losing a third of its value, I suspect the pattern seems more possible now.

XLY & XLP have been upside leaders for the past few years….watch these two in upcoming weeks and months to see if the Eiffel tower pattern starts playing out, because the upside leaders could turn into downside leaders!