Hollywood and Gold investors have poor timing at extremes? 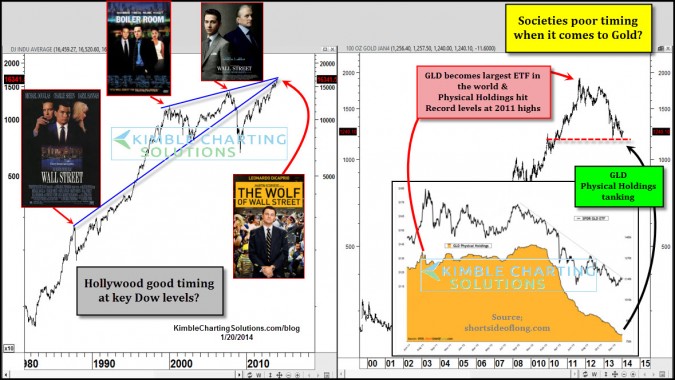 Four of the key highs in the Dow since 1987 have taken place about the time that Hollywood releases a movie about Wall Street (left chart) above? So up until now its paid to harvest long holding in the Dow when a new Wall Street movie is released. Will its timing be different this time around?

When Gold was trading at $1,600, the Power of the Patterns target was $1,900 (See gold target here) At the time Gold was hitting the target, GLD became the largest ETF in the world and physical holdings in GLD were hitting all-time highs.

Does Hollywood help us with sell signals on the Dow and the crowd help us with buy/sell decisions on Gold? The lower right chart from shortsideoflong.com reflects dumping of physical holdings by the ETF are taking place as a key support line is coming into play in Gold.

Let Hollywood and society be your investment friend or guide? You be the judge!