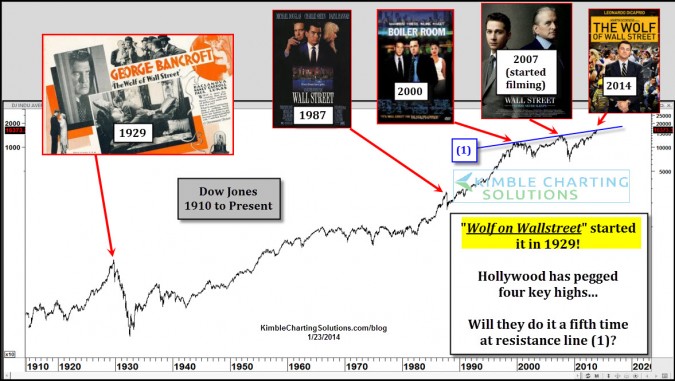 In 1929, Hollywood released the movie “The Wolf on Wall Street” about a ruthless trader (Bancroft) who corners the market in copper and then sells short, making a fortune (Movie details here) Ironic the movie was released right before the stock market crash.

Since then Hollywood has created several movies about Wall Street and they have been released at key market tops. Now 84 years later, another “Wolf on Wall Street” movie comes out. Does that mean anything? Stay tuned.

I do find it interesting that if you tie the 2000 & 2007 movie releases together, you get  resistance line (1), where the Dow is hitting it at this time, at the release of another “Wolf on Wall Street” movie!

Hollywood has pegged 4 key highs over the past 84 years, will they do it again???