After late week rally, what are markets facing this morning?

A week ago today, the Dow fell 300 points, broke a couple of support lines+ and moving averages. News stories appeared about a 1929 repeat  and were discussed a good bit and VIX fear levels jumped up a large percentage.

Due to fear levels shooting straight up, the Inverse Fear ETF (XIV) fell hard, pushing it down to support (See XIV support here) .

Premium & Sector Members shorted Fear at the top of its move, by purchasing XIV, as it was hitting support. By week’s end, XIV and members had gained over 13%; as the market rallied and fear fell. At the end of the week, members harvested some gains as XIV was hitting the 50% Fib resistance level, reflected in the chart below. 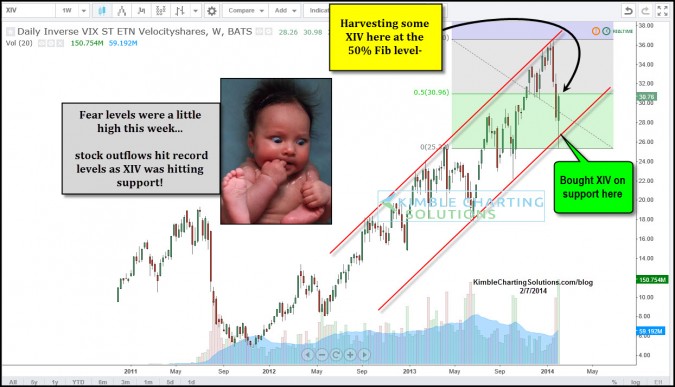 After a late week rally,where did the markets end from a technical standpoint?