For the past few years, doing the opposite here has paid off!

Is it hard to go against the crowd or trend? Even after 34-years of being in the business, I still get a few butterflies in my stomach when the Power of the Pattern and sentiment line up suggesting a change of trend is at hand.

In May of 2012, the Power of the Pattern suggested that interest rates were ready to blast off; bonds were about to get hurt big time and few believed this idea, as 65% of investors were bullish bonds (see skyrocket post here)   Following that post, TLT fell over 20% as the yield on the 30-year bond rose over 30%.

It paid to do the opposite of the crowd and follow the pattern in May of 2012,…where does the crowd stand now and what is the Power of the Pattern suggesting today?

Two months ago the Power of the Pattern started sharing bearish patterns in yields suggesting interest rates should fall.  Few believed this idea, as bond bulls had declined to 35%. (See post here)

The talking heads on TV can’t talk enough about what the impacts of the Taper, debt-ceiling challenges, and the impact to bonds when China starts dumping U.S. Government paper! Should you invest based these stories?

Bottom line, right now from a Power of the Pattern and sentiment perspective, the strong rally in yields created a bearish rising wedge; which 65% of the time results in a decline. At the same time, very few believe bonds will rally, as bond sentiment stands at just 24%. 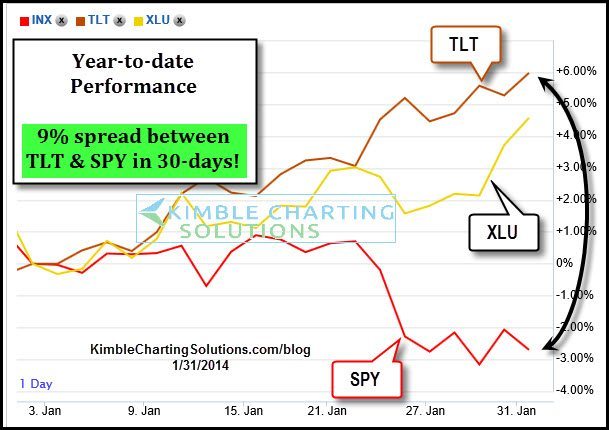 It has paid to do the opposite of the crowd when it comes to bonds the past few years. The Power of the Pattern has been sharing with Premium Members and on the blog that interest rates were due a decline over the past 6 weeks. The chart above reflects the performance this year of the S&P 500 to interest-rate-sensitive ETF’s,TLT, & XLU (utilities). Will it be another opportunity? Stayed tuned!