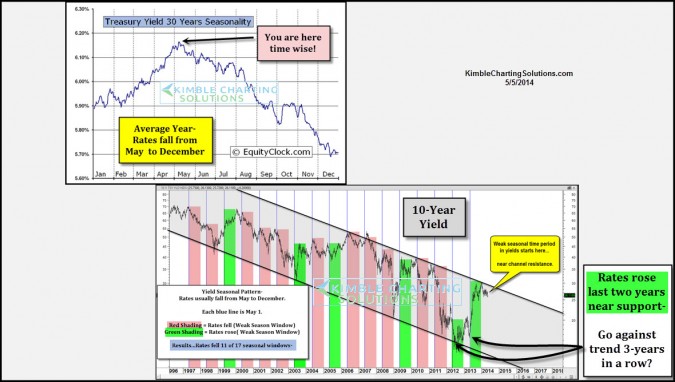 Tis the season to hear…”Sell in May and Go away!” This mantra comes from below average performance of stocks during the May to October time frame, compared to stronger stock performance from October to May.

Could we apply this idea to Yields?  Is it possible to “Sell Yields in May and Go away?” The upper left chart shows the “seasonal pattern that the 30-year bond” seems to follow, reflecting that yields tend to peak in May and decline throught December. The seasonal bond chart was created by Equityclock.com

The lower right chart above looks at each years May to December performance of the yield on the 10-year note over the past 17 years. This chart reflects that yields have declined 11 of the past 17 years (Two-thirds of the time). The red shaded areas reflect falling yields in the May-Dec time frame and the Green shaded areas reflect rising yields in the May-Dec time frame.

The last two years yields have bucked the trend, rising during this time frame. Will it be different this year? 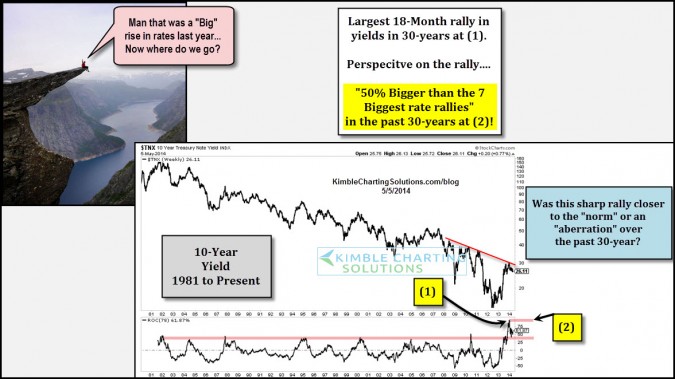 Was the rally over the past 18-months in yields, the norm or closer to an aberration? Think about this. If you took the 7-largest 18-month rate rallies over the past 30-years, the rate increase we just endured was over 50% bigger than every one of them!

My take…this was much closer to an aberration than the norm.

The Power of the Pattern has been beating the drum to Premium Members since December of 2013, that rates were due to decline/bonds to rally. Few bond traders were bullish the beginning of 2014 and most of the chatter has been about the Taper and rising rates!