VIX index suggests there could be some fireworks in July! 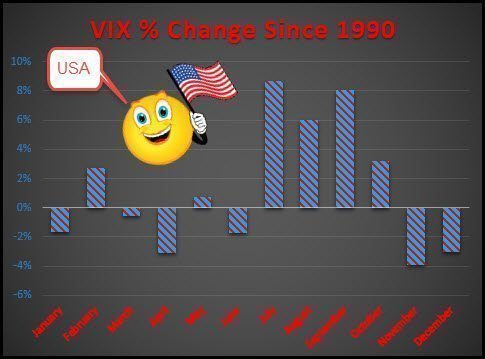 A good friend of mine, Ryan Detrick, CMT shared the chart above along with his comments/perspective on the VIX and I wanted to pass it along on this first day of July. Thanks Ryan for sharing.

Historically, July is the best performing month in the usually rather weak 3Q. None the less, if you go back to 1990, you’ll find that the VIX actually has the highest average return in the month of July! In fact, it comes in at an 8.65% average and is up 14 out of 24 years – or up 58.3% of the time.

Now, I’ve long been a proponent that you should focus more on the VIX based on absolute moves, not percentage changes. Remember, it is much easier to have a big percentage move higher when the VIX is low. In other words, a 20% move from 10 to 12 sounds like a lot, but it isn’t nearly the same in terms of the volatility is produces as an absolute move from 30 to 35 (16.6%).

Could July just be a function of a low VIX coming into it? Maybe. Still, this is one of those stats I’d still rather know than ignore.