Investors often enjoy a strong wind at their back in the fourth quarter, based on seasonal patterns and stock market history. Will 2014 be different?

When looking at the S&P 500, more than half of the index’s gains over the past 25 years took place during the final three months of the year. Source Doug Short 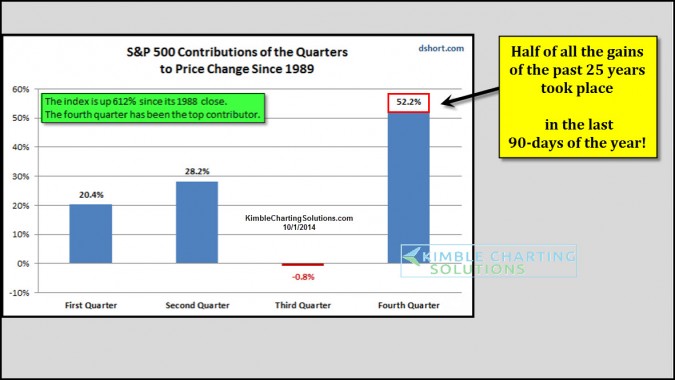 Studying seasonal cycles can help investors gain perspective and align themselves with likelier outcomes. Of course, nothing is certain when it comes to investing, and it’s important to remember that these are average returns. In other words, every year is different.

For example, the fourth quarter of 2008 during the financial crisis was the worst quarter during the 15-year period. (Source Doug Short) 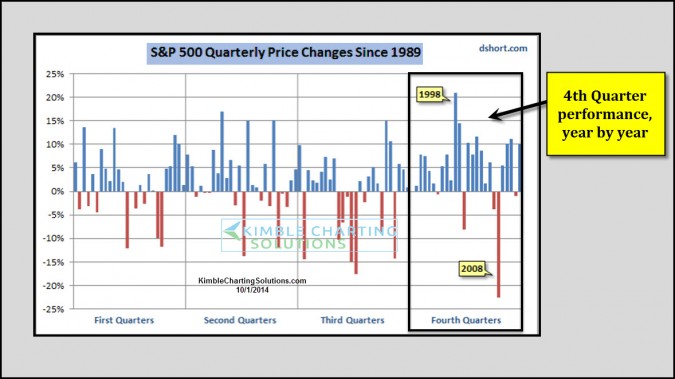 Here are three reasons why history suggests investors can expect good things the next three months even if the economy faces questions:

For whatever reason, the stock market tends to do well in the 4th quarter. Since 1950, the S&P 500 has posted an average gain of more than 4% in the fourth quarter, and has finished higher 78% of the time. In fact, we are entering the half of the year that tends to be strong.

“It’s the beginning of the November through April period. The ‘sell in May’ goes the other way,” said Sam Stovall, chief equity strategist at S&P Capital IQ, in a CNBC article.  ”We are entering the best six months period, where the average gains since World War II has been 15.3% and the frequency of advance is 94%.”

Ok, so the fourth quarter is often kind to investors. What if we drill down further to factor in the so-called Presidential Cycle.  ”

Wouldn’t you know it, breaking down all 16 quarters during a four year Presidential Cycle since 1950 found that the fourth quarter of the second year has the highest return average,” Dietrick wrote at his Tumblr blog.

In other words, were hitting the strongest quarter every four years, with and an average of 8% and rising 88% of the time.

But wait, it gets better.

Since President Obama is in his second term, this is actually his sixth year in office. So, Dietrick went back to 1950 and crunched what happened during the sixth year of the administrations of Eisenhower, Reagan, Clinton and Bush.

“Doing this show much different results than what the average second year of all terms have done, as year six is actually extremely bullish,” Dietrick said. Ech one is positive and the average return is 23.24%. 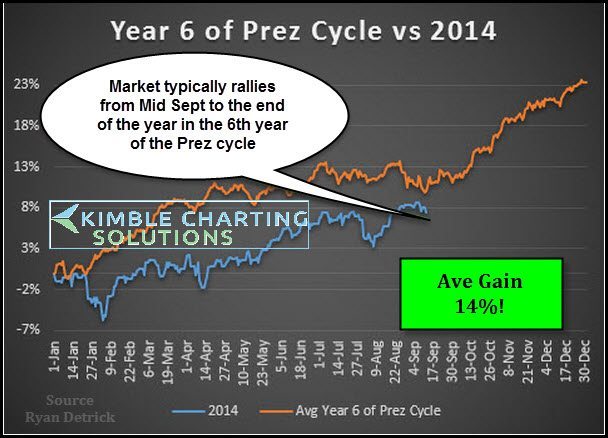 One big reason the fourth quarter tends to be strong is that December is a great month for the stock market. Since 1928, the S&P 500 has it best monthly winning percentage in December with 64 gains and 22 losses. December is tied with July for the best average monthly gain at 1.5%, according to Yardeni Research

Conclusion: The S&P 500 just extended its winning streak to seven straight quarters, and it’s reasonable to wonder just how long it can continue. Some investors are also worried that the Federal Reserve is winding down its economic stimulus, or QE.

The Russell 2000 has been the weakest index in 2014, what happens any day now could send an important signal to the broad markets and impact the seasonal window, as this important and rare jam is about to end!

Still, history suggests that investors just might find a shiny new quarter during the next three months.