Russell doubles S&P’s performance of late, breakout could be near! 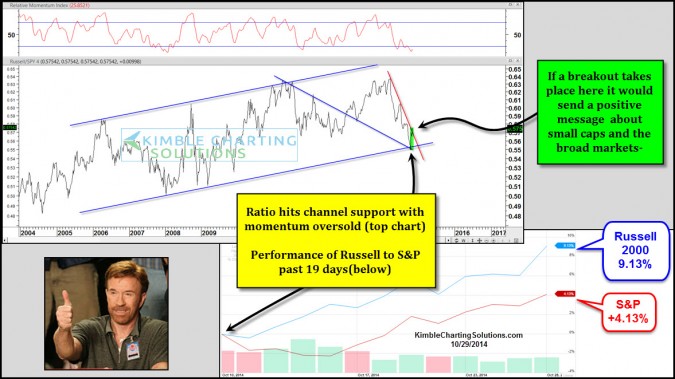 A couple of weeks ago on See it Markets, the Power of the Pattern suggested that Small Caps looked poised to rally (see post here). The article highlighted that the Russell 2000’s performance year-to-date was lagging the S&P by a large percentage and Russell/SPY ratio was hitting multiple support points with momentum oversold.

The past 19 days has been good for the S&P 500, as its up over 4%. The time frame has been even better for small caps, as they have doubled the gains, making over 9%.

The top chart now reflects that the ratio is making an attempt to break above steep falling resistance with momentum still oversold.

Many have been concerned that the weakness in small caps this year was a sign that the broad markets could be in trouble going forward. Humbly, these concerns were understandable. If a breakout in the ratio takes place and it continues to push higher, it should be a positive sign for both small caps and the broad markets.

Earlier this month I shared “Three Reasons Why Stocks Could Do Well In The 4th Quarter”  If this ratio should break out, it would be another reason stocks could do well between now and the first of the year.