Coffee could get much cheaper if this fails at (2)! 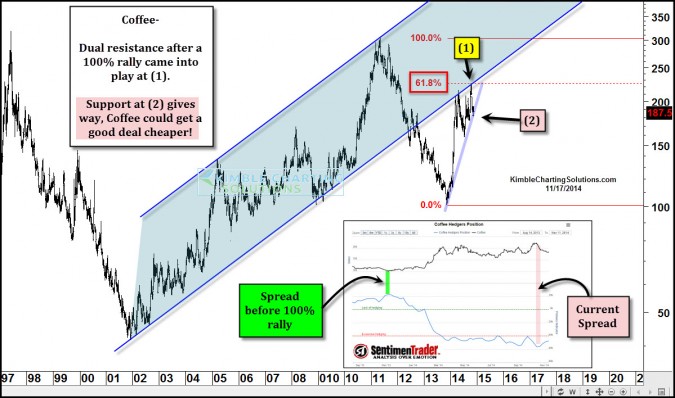 I’ve enjoyed sharing chart patterns and sentiment over the past 18-months on Coffee. Coming into this year, Coffee had done poorly and few investors were bullish the product. Then BAM….Coffee shoots up 100% in a couple of months.

I was deeply honored when co-founder of Stocktwits, Howard Lindzon, gave a shout out standing ovation for our Coffee calls/ideas on stock twits after the huge rally. (Standing Ovation)

That is all the past now, lets take a look at the current situation. Coffee’s 100% rally took it up to the bottom of channel resistance at the 61% Fibonacci resistance level at (1) in the chart above, were the rally stopped on a dime!

Now Coffee may be forming a bearish rising wedge with sentiment almost the polar opposite as it was the first of the year according to Sentiment Trader.

The current take from the Power of the Pattern….if support breaks at (2), a ton of traders could be caught on the wrong side and Coffee could become a good deal cheaper!

If Coffee falls a good deal, will Starbuck’s drop their prices???  ;)