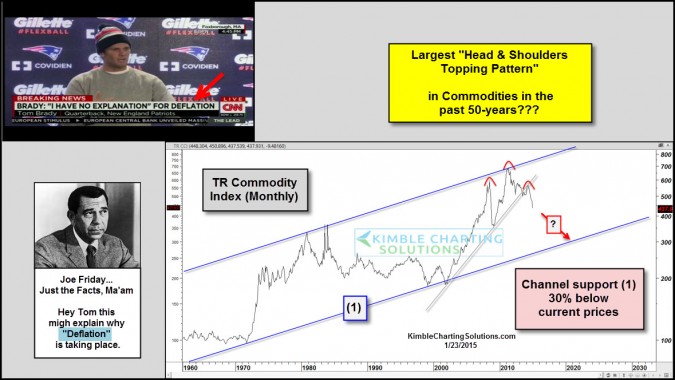 The TR Commodity Index has been in a fairly well defined rising channel over the past half century. After a solid rally that lasted around a decade (1972-1983), the index then peaked and fell for the next 20-years.

The index then hit the bottom of the channel back in 2000 and again rallied for around a decade (2001-2011), taking it back to the top of this long-term channel.

From a very long-term perspective, it appears that the index created one of the largest “Head & Shoulders topping patterns” I have seen in my 35-years in the business.

Even if I am 1,000% wrong on the H&S pattern, without a doubt the index did kiss the underside of an 11-year support line that became resistance last year and resistance held, as the index has been falling off the table since!

FYI- In case you were wondering, the index kissed the underside of resistance in March of 2014, “months before crude oil peaked!”

Joe Friday just the facts…This index remains in a downtrend and channel support comes into play around 30% below current prices.

Bond players like this, Commodity players are concerned about it and the jury is out how stock players will react should this index fall another 30%!

See more of our research and services…..HERE