Bonds breaking support, is it due to King Dollar weakness?

Did key bond ETF’s create long-term double tops over the past couple of years? The above 3-pack takes a look at three different bond ETF’s. AGG and LQD earlier this year attempted to break above 2012 highs. At this time it looks like they failed and may have created double tops. As the potential double top was forming, TLT was hitting the top of its multi-year rising channel.

What do all three have in common? Recently each is breaking below support dating back to 2013 lows.

Any chance the U.S. Dollar has something to do with this? 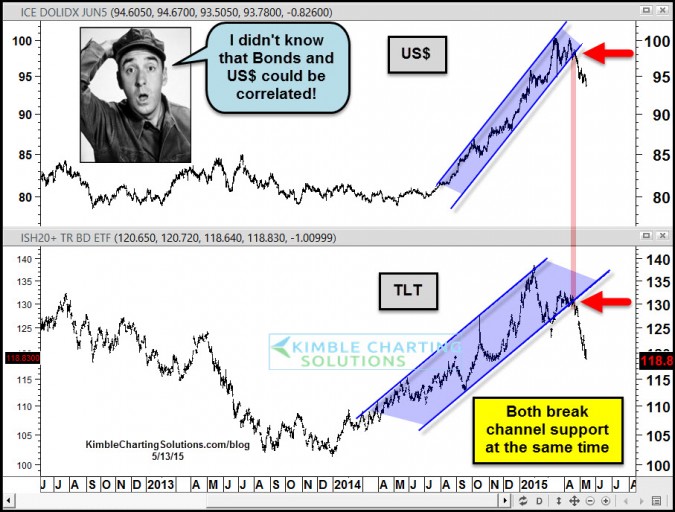 TLT and the U.S. Dollar both had fantastic rallies last year, forming steep rising channels. Speaking again of “Double Tops,” did the US$ also put in a double top earlier this year?

As you can see TLT and the US$ both broke support of the steep rising channels at the same time in the chart above.

Regardless of the perceived reason to why this is happening…bond prices across the board and the US Dollar are breaking support. A few times in history this has happened, Commodities have caught a bid and moved higher. Will it be different this time?