The chart above reflects that the tops in 2000 & 2007 were 7 years and 7 months apart. Is it possible that another top is taking place 7 years and 7 months from the 2007 high? As the S&P is facing this potential time window repeating pattern, it is also staring the Fibonacci 161% Extension resistance level based upon the 2007 highs and 2009 lows, at the top of a rising wedge.

Is the S&P the only market facing a breakout test? The chart below takes a look at the white hot DAX index.

As you can see the DAX above is facing a time and price situation similar to the S&P 500 right now. The DAX is also facing its 161% Fibonacci Extension level based upon its 2003 lows and 2007 highs.

Are any other global markets facing resistance that could be important? Below takes a look at the Shanghai and CAC-40 Indices 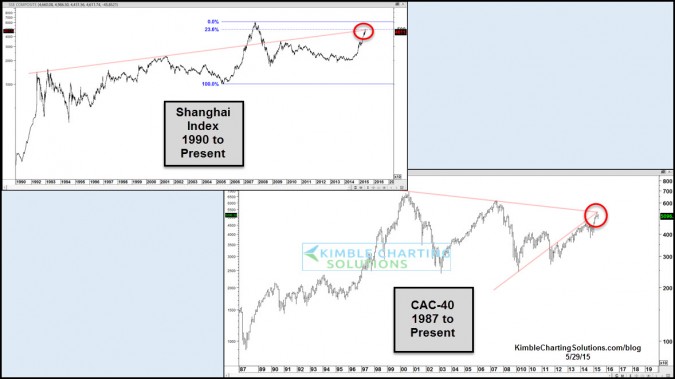 The Shanghai is staring its 23% Fibonacci retracement level based upon its 2005 lows and 2007 highs and a line dating back to 1992 that has reflected a few highs over the years.

Joe Friday just the facts…..This series of charts reflects that from a time and price perspective, several markets are facing would could be important breakout levels.

If you would like to stay up to date on these patterns, I would be honored if you were a Triple Play Advantage Member