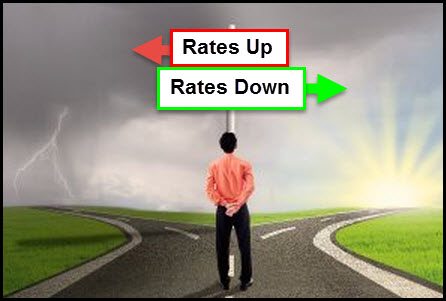 It is easy to find talk these days about the Fed moving interest rates higher. Humbly I don’t know what Janet will do next. Could it be more important what billions of free thinking people do with bond positions they have at the cross roads below?

From a price perspective, the yield on the 10-year note looks to be at a pretty important price point right now in the chart below!

Yields might have formed a bullish inverse head and shoulders pattern over the past 9-months, which if true, would suggest yields break resistance at (1) and move a good deal higher. If this pattern read would happen to be correct, the measured move calls for the yield on the 10-year to rally to the 3.30% level, which is nearly 50% above current yields. If rates would push that much higher, it wouldn’t be  pretty on bonds.

Is the 10-year note the only bond market facing an important test of resistance? Nope!

Where bond prices and yields stand at the end of the year could have more to do with what billions of free thinking people do at these key resistance points than news coming from the Fed in the next few weeks/months!