Buy Low & Sell High Fan? If so, check out these two assets 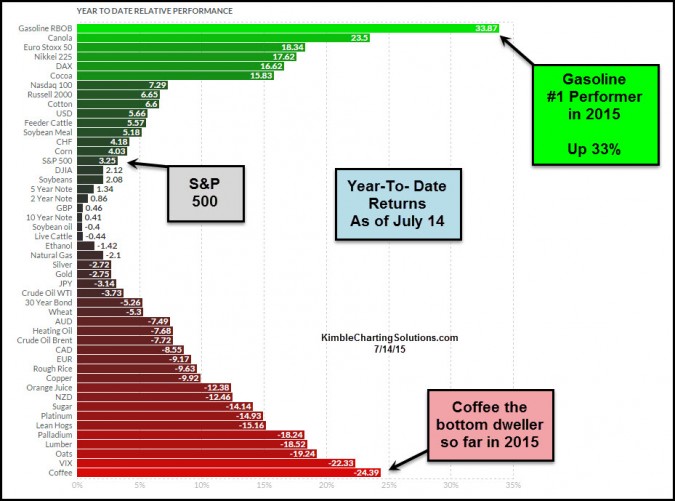 The S&P 500 has been pretty quiet so far this year, up just 3%. The same can’t be said for Gasoline or Coffee!

Do you believe in the idea of “Buying Low & Selling Higher?” This post today looks at the Year-to-Date best and worst performing assets.

The chart below updates the current status of Gasoline ETF UGA

The strong move up this year took UGA so far stopped on a dime at the top of this rising wedge and its 38% Fibonacci retracement level. Of late UGA has been soft, breaking below the bottom of the bearish rising wedge formation. Earlier this year Premium & Sector members bought UGA at the end of January and harvested gains after a nice rally.

Coffee conditions in December of 2013 – Coffee hit 12-year rising support, momentum was oversold and few investors were bullish Coffee after it had declined almost 65% in two years . What happened next? Coffee doubled in 90-days!

Current Coffee conditions – Coffee’s decline has taken in down to a rising support line that has been in play since 2002, it looks to have formed a bullish falling wedge with momentum oversold. Bullish opportunities look to be in play should Coffee buyers step forward and break overhead resistance.

Even though the S&P 500 has been quiet this year, many assets have had big moves, such as Gasoline. Did you realize that Crude Oil and the Yield on the 10-year note both rallied over 30% this year in short periods of time?

If buying low and selling higher is of interest to you, I would honored if you were a Premium of Sector/Commodity Sentiment Extreme member.

Click below comparison of Premium -vs- Sector/Commodity Sentiment Extreme membership