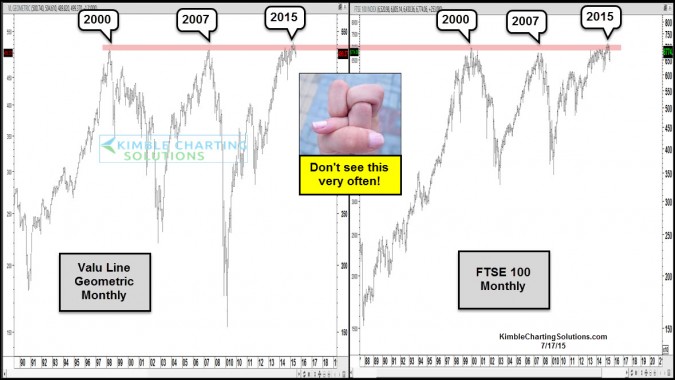 I shared this chart with members last week, taking a long-term look at one index in the states and one from Europe, that both look a ton alike!

Humbly I believe we live in risky times, not due to the chart above though. The high degree of correlation raises risks for all of us.

Will it be different the third time and each breaks resistance? Sure could as the trend is up and each are above long-term moving averages. Should a breakout take place here by one of them, the other could follow along with other key indices that have been stuck at breakout levels since the first of this year!

Few investors are bullish at this time and if a breakout would happen, it would catch a good percentage of investors by surprise. This chart from Ryan Detrick reflects AAII bullish levels that were last hit at the 2003 & 2009 market lows.

The stock/bond ratio also finds itself at key breakout/resistance test levels at the same time!

Several markets from around the world have paused at key price levels, so far acting as resistance. How they handle this could tell us a ton about where markets will be at the end of this year!