Change investment allocations due to .2% of a move? 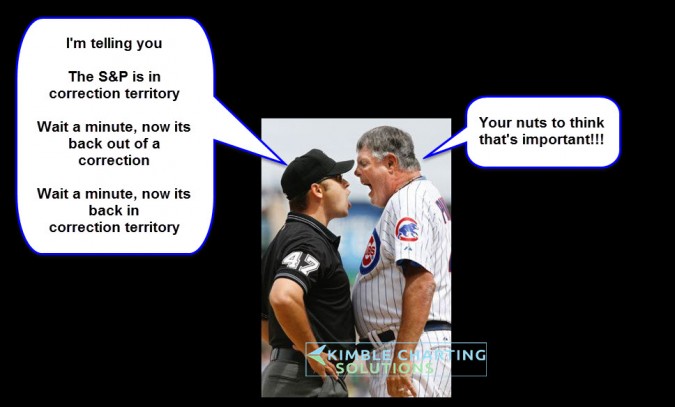 Do you find yourself agreeing more with the person on the left or right? I am in the camp with Lou on the right. Should we make investment decisions based upon a term (correction)? Not me

This chart looks at the Dow since 2010 and looks at trend channels and Fibonacci retracement levels.

The Dow has been in a well defined rising channel over the past 4-years, touching resistance numerous time and creating support back in 2011. The decline last week did nothing more than take the Dow down to the bottom of this rising channel.

I applied Fibonacci retracement levels to the 2011 low and the highs this year. As you can see the 23% level was hit at (1) this week, at the same time it was hitting the bottom of this rising channel.

Should you make investment decisions based upon the market being down 9.9% or if its down 10.1%? Good luck if you do.

Humbly I have a bias and its following the price action and trends billions of free thinking people create.

Despite the decline since the highs in May, this intermediate 4-year trend remains in tact. If support at (1) breaks, then I would be looking to make some allocation changes, not whether is in “correction mode or not!”

If you would like to get empowered by the Power of the Pattern, I would be honored if you were a Premium or Triple Play Member

See details on both (HERE) or by clicking below