Bio-Tech- Weakness in play, pull S&P down with it again? 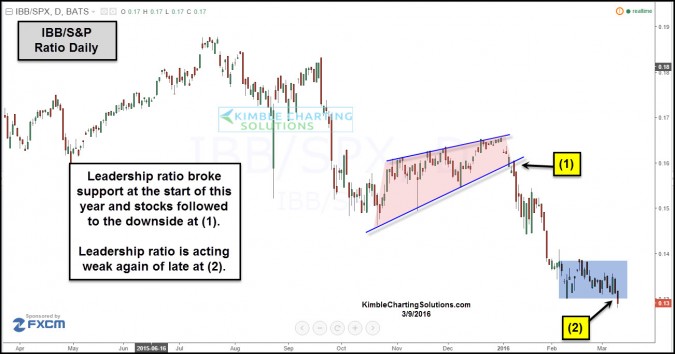 Bio-tech (IBB) was a leader on the upside from 2009 to 2015. Since last summer, its been a leader in the opposite direction, on the downside.

When the ratio broke at (1) to start the year, Premium Members “Double Shorted” Bio-Tech by purchasing ETF (BIS). This trade paid off well for members, as BIS leaped higher in price.

While the S&P has rallied of late, Bio-Tech has not went along for the ride. As you can see in the blue shaded area, the ratio has traded sideways, reflecting that IBB has not been stronger than the broad market of late.

When the ratio broke support at (1), IBB fell hard and the S&P 500 went along with it. Right now the ratio is testing horizontal support at (2). If support would give way, it would suggest more downside leadership is to come from the important Bio-Tech sector, which could impact the broad market again.

Humbly feel, what the ratio does at (2), is very key for the broad market!