I was very blessed and lucky to be influenced by Sir John Templeton, a couple of decades ago. Sir John shared that other than the bible, the book below was the most important book he had ever read. 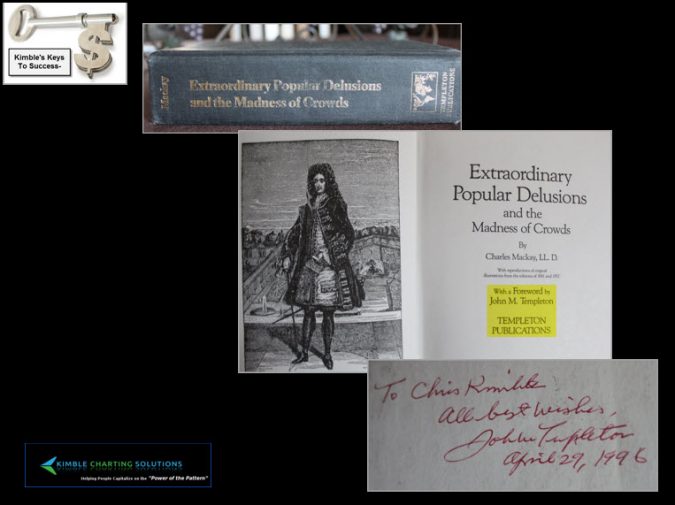 Two months ago in our Sector/Commodities Sentiment extremes report, we addressed that a “Popular Delusion” could be taking place, in the most important commodity on the planet. The Power of the Pattern made the case at the time that Crude Oil was due a rally and the rally in Crude Oil, could be good for stocks.

On February 25th we shared the chart below, reflecting that an asset had just experienced its largest 2-year rally ever and momentum looked to be overbought. What would you have done with the chart below, two months ago?

The chart above was shared two months ago (see post here)  What would you have done at this price point? The chart above was “Crude Oil” on a monthly basis, which was inverted (turned upside down). We made the case with Premium Members that Crude Oil looked to be on support and that a rally in Crude Oil, could be good for stocks. A couple of days later, members shorted the Fear index, buy purchasing XIV. The following month, stocks had a good rally and XIV screamed higher, moving up 31% on the month.

Below is an update on the chart above.

Crude Oil on a monthly closing basis, hit triple support at (1), two months ago, when it was trading near $30 a barrel. Since the time of the Joe Friday post on 2/25/16, Crude Oil has rallied nearly 50%, in 60-days. Now Crude Oil is breaking above falling resistance, while monthly momentum remains oversold at (2) above.

The Power of the Pattern felt like a Popular Delusion was taking place then (way too many people were bearish Crude Oil), the most important commodity on the planet. As mentioned above, while Crude looked to be presenting an opportunity to make money in oil and stocks in general and we still feel Crude Oil will highly influence stocks going forward.

If you feel you could benefit by this type of research and Power of the Pattern analysis, we would be honored if you signed up and become a member of our daily or weekly research reports.

If you would like a free copy of the Popular Delusion in Oil report, produced two months ago, send an email to services@kimblechartingsolutions.com and we will be honored to email it to you.