CNBC shared the stat below this morning, per the Dow just experienced the “biggest comeback since 1933.” 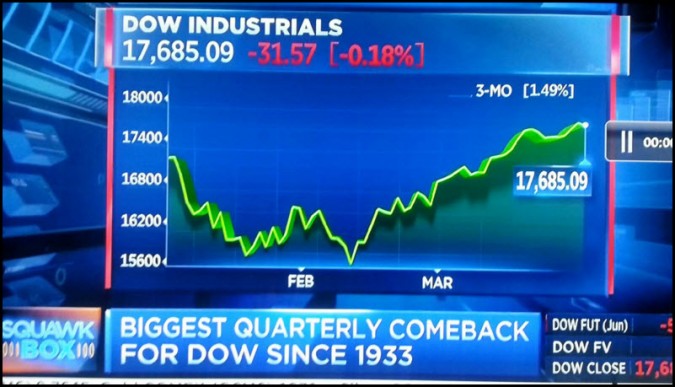 Does a “comeback” mean money was made for the buy and hold community? Even though the comeback was historic, the net return on the Dow as 1.49%. Even though the quarterly gain was small (+1.49%), did you realize that over the past 5-quarters, the S&P is up only .84 points. Good friend Ryan Detrick, points out an interesting stat below.

Ryan’s stat really caught my eye; 15-month gain for the S&P is a whopping .84 points. For sure little gains for the buy and holder, yet opportunity took place in the 4,735 point movement during this time frame. So how does one take advantage of movement, when the broad market is not doing much over the past 15-months?

On 3/1 Premium Members bought Inverse Fear ETF (XIV) as fear was lofty, pushing XIV down 60% in the prior 9-months. This was the worst 9-month performance for XIV, since the 2011 lows. Below looks at the performance of XIV and SPY for the month of March.

Joe Friday Just The Facts- Even though the broad market has little to brag about, excess fear and movement can be taken advantage of, just like Members did this past month!

Majority of global stocks markets remain in a down trend (lower highs and lower lows) over the past year. Despite this trend, opportunities remain huge for investors around the world in a variety of places.

We have been blessed with gains in many ways this year, on both the long and short side of trades. We believe the rest of 2016 will be just a good as the opportunities that have presented itself in the first quarter. I would be honored if you were on board as a member, during these unique and opportunistic times!