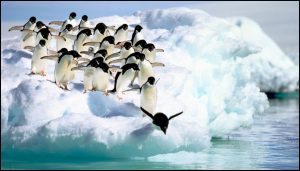 The Power of the Pattern has been highlighting the importance of the German Stock market (DAX) for the past couple of years. This key stock index seems to have Risk On and Risk Off influence, on key stock indices in the states.

Below looks at the DAX index and what patterns it is dealing with of late.

From a 30,000 foot view point, the DAX remains in a long-term rising channel, that has been in play for the past 6-years.

Over the last year, the DAX has created series of lower highs, that it being given a chance to break free from. At this time the DAX is testing falling resistance and its 50% retracement level, based up its weekly “closing highs” in 2016 and its weekly “closing lows” earlier this year, at (1).

A breakout above (1), would suggest a break of its 1-year falling trend, which would be a positive for the risk on trade there and in the states.

If selling starts increasing at (2), causing the DAX to break short-term rising support, it could bring about more selling in this leading global stock index, which could ripple into the markets in the states.

We remain of the belief that the DAX is very important on a global scale and it currently at a price zone that Risk On traders, would prefer support holds at (2).