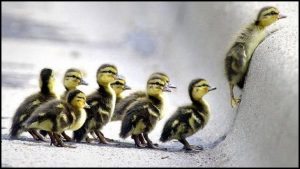 Junk Bonds are often viewed as leading indicators for stocks. Below looks at leading junk bond ETF JNK and what is is dealing with, from a Power of the Pattern perspective at this time.

Once junk bonds started turning weak in 2014, stocks struggled to move much higher.

Once Junk bonds hit support and turned higher in February of this year, stocks did the same.

Currently JNK is testing a couple of breakout levels at (1) above.

For the broad market to keep heading higher, stock bulls would like to see JNK breakout above resistance tests above.

Should this leader fail to breakout and turn weak, stocks would most likely be concerned, if that took place.