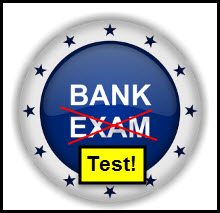 Most quality rallies in stocks, have historically seen banks come along for the ride. Up until a couple of months ago, Banks had been a disappointment to many, as they had lagged the broad market for the prior 18 months.

Below looks at the Bank Index (BKX) over the past decade and why the Power of the Pattern, feels banks have an important “Breakout Test” in play at this time!

The Bank Index has remained inside of a rising channel since late 2009. The Bank Index looked to have formed a pennant pattern, creating a series of higher lows and lower highs. When the index broke out, Premium Members bought Financial ETF (XLF) at (1), back in August.

The Bank Index now appears to be testing a “Triple Breakout” price zone at (2), which is in play currently.

The trend in banks is up, do NOT overlook this. At this time, due to the breakout test, Premium Members are pulling up stops tight at (2). If banks breakout at (2), the uptrend should not only continue, it could pick up speed. Big Test/Exam in play for financials at this time!