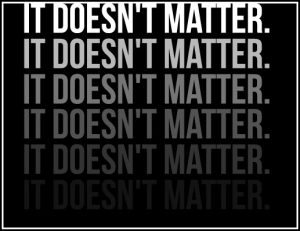 In 1999, I had been in the financial planning business for the prior 19-years and something odd seemed to be taking place, which really had my attention back then. What did I notice? Junk Bonds were diverging against the broad market over the prior year. In hindsight, Junk Bonds actually diverged against the broad market for nearly 2-years, before the 50% decline in the S&P from 2000 to 2003.

A similar negative divergence took place from 2005 until 2007, which got my attention again, as Junk Bonds didn’t go along with stocks to the upside for almost 2-years.

Below looks at the Pimco High Yield Fund (PHDAX) and S&P 500 over the past couple of decades.

Junk bonds have been diverging from the S&P 500 over the past 2-years again and is testing falling resistance and its 50% retracement level, while in a downtrend (yellow box above).

I love the quote…”It doesn’t matter until it matters!” So far the negative divergence between junk and stocks Does Not Matter! What does matter then?

In the chart above the Russell and Dow Transports both find themselves in quality rising channels, as both are testing breakout levels at the same time.

If both of these breakout, that is what matters!!! If for some odd reason both of these indices would happen to struggle with a breakout and sellers come forward, the divergence in Junk could matter. Right now the junk story doesn’t matter…Time will tell if it’s different this time