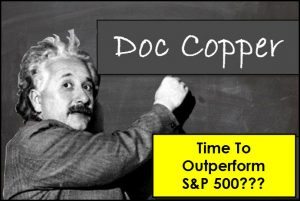 Some feel the price action of Copper is important to watch, because it could send important macro messages, about world wide growth or lack of.  Since 2011 Ole “Doc Copper” has been very weak, no question about it. During this weakness, the S&P 500 has continued to move higher. So is the price action of Doc Copper not useful or relevant anymore? 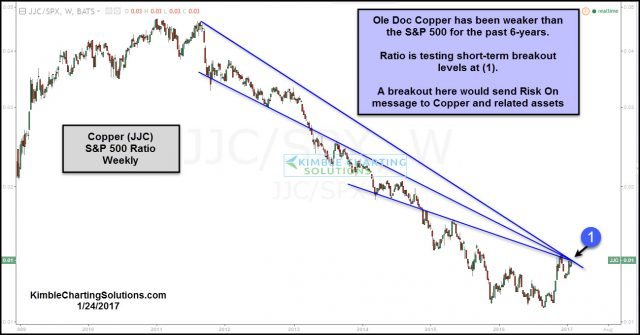 Doc Copper has clearly been weaker than the S&P 500 since 2011 and the Long-Term trend remains down, as the ratio continues to create a series of lower highs and lower lows.

The short-term trend is attempting to turn higher as the Copper/SPY ratio is testing a cluster of resistance at (1).

If a breakout happens, the suggested message would be to; long Copper and Short the S&P 500, if one is comfortable with a pair trade. If a breakout does take place, other potential beneficiaries could be FCX, RIO or JJC.

Even though Ole Doc Copper might not have sent a valuable message to the S&P 500 over the past 6-years to some, we humbly feel if a breakout takes place at (1), investors should be aware of opportunities that could present themselves in the hard hit sector.