Crude Breakdown could take stocks with it says Joe Friday

When an asset takes out horizontal resistance to the upside, it is nice to see the old resistance tested as new support, before pushing higher.

The S&P 500 traded sideways for nearly 18-months, before breaking out to the upside and then testing old resistance as new support at (1) below. Once this support held, the S&P took off to the upside in short order. 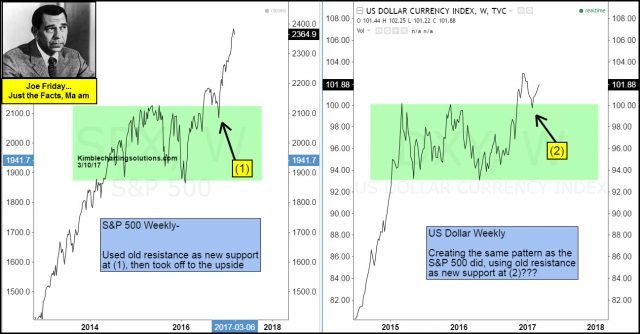 The US$ chart on the right reflects that that is has traded sideways for nearly two years. It broke above old resistance and came down to test it as support at (2). Could the US$ be testing old resistance as new support, in preparation to move much higher like the S&P 500?

Joe Friday Just The Facts; If King Dollar does duplicate the pattern of the S&P 500, Crude Oil should be put under pressure.

If Crude would give way, could it impact the broad market?

Joe Friday Just The Facts; Investors might want to pay close attention to what Crude Oil does at (2), could impact the broad stock market, were it to repeat 2015 pattern.