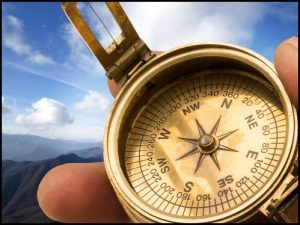 The S&P 500 along with numerous indices have been screaming higher over the past 90-days. Pre-election fear levels were high and stock market bulls, were hard to find. The strong move up, has some sentiment indicators reversing course, from where they were 90-days ago. Sentiment remains important to us, not nearly as important though, as the Power of the Pattern.

The 2-pack below looks at the S&P 500 ETF (SPY) on a weekly closing basis (left) and Hi/Lo/Closing basis (right), over the past couple of years. 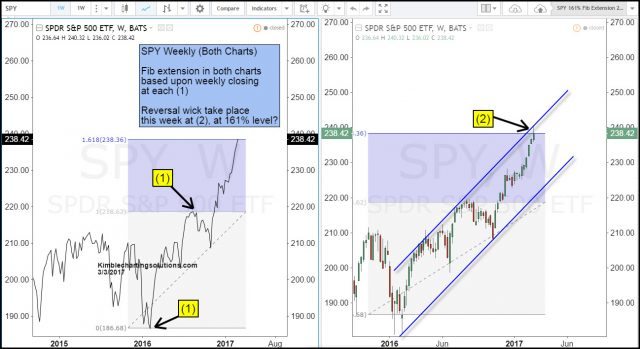 Without a doubt the trend remains up in the charts above and 1-week’s price action does NOT mean, a trend reversal has taken place.

We do find it interesting that if one takes the “weekly closing highs” last year at (1) and applies Fibonacci to those levels, the 161% extension of the closing highs and lows last year, comes into play at the 238 level. Last week the ratio closed right on the 161% level and may have created a small reversal pattern at (2) last week.

As the same time that the S&P might have created a small reversal pattern the Equal Weight/Cap Weight ratio (RSP/SPY) has been negatively diverging against the S&P 500, for several weeks below. 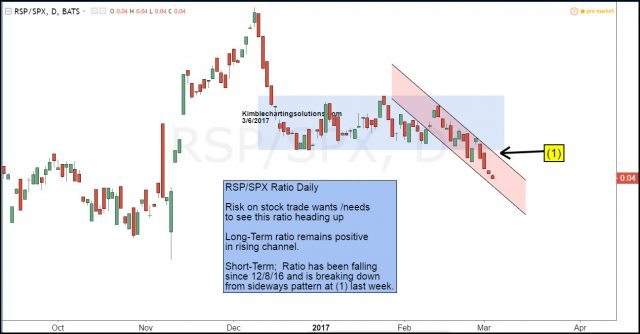 Historically, the risk on trade in stocks (being long), prefers to see the RSP/SPY ratio heading higher. When the ratio heads lower, it reflects that fewer and fewer stocks are pushing the market higher (getting thinner).

Since the start of the year, the ratio has traded sideways, inside of the blue shaded channel. Over the past 3-weeks, the ratio has been diverging against the broad markets and last week broke below the sideways channel at (1).

The small reversal pattern last week at Fibonacci 161% level does NOT mean the trend will reverse at these levels. If weakness in the SPY and the RSP/SPY ratio continues, it would slightly increase the odds that the pattern this past week, might have been meaningful.