Stocks and Bonds; Critical change of direction in play?

Since the summer of 2016, stocks have done very well and bonds have been thumped, as rates have risen sharply. Is it time for these trends to take a break? Below compares the performance of the S&P 500, with the popular bond ETF TLT over the past 9-months. 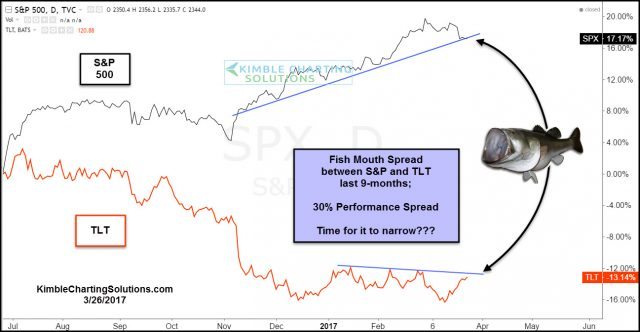 The performance spread between stocks and bonds over the past 9-months is a big one! Rare to see the spread between the two being 30% in a 9-month time frame! If the S&P would happen to break support and TLT breaks resistance, the narrowing could begin. The following two charts check out what the Power of the Pattern looks like, for TLT and the S&P 500.

First off lets be clear about this, the S&P 500 remains in a solid uptrend and is above its 200 day moving average and continues to make a series of higher lows and higher highs. Line (A) has been in place since the late 1950’s and was last touched back at the highs in 2000. Currently the S&P is kissing the underside of line (B) at (1), which is a parallel line of (A). This is a price point where the bulls wouldn’t care much to see selling pressure start taking place.

Below looks at the pattern of TLT over the past decade.

TLT finds itself testing 6-year rising support and its 61% Fibonacci retracement level of the 2013 lows and 2016 highs at (1). Momentum is oversold and could be turning up.

The spread between stocks and bonds is very high in the top chart. If the S&P breaks support and TLT breaks above resistance, the large fish mouth spread could start a narrowing process. Joe Friday shared last week that fund flows to the S&P 500 are highest in years. (See Post Here). This is a setup that bulls would not want to see selling take place in the S&P, nor see weakness in Crude Oil continue!