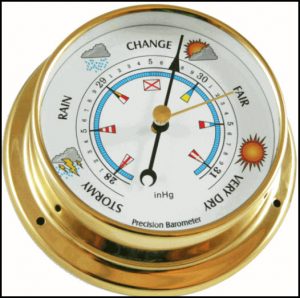 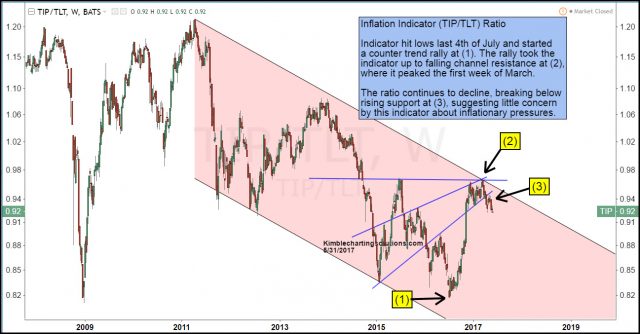 Since 2011, this inflationary indicator has continued to create a series of lower highs, inside of the red shaded channel above. As mentioned in the chart, the indicator actually hit a low last July and started pushing higher. At the time of the low in this indicator at (1), nearly 90% of bond investors were bullish bonds and few thought the Fed would raise rates. That was a crowded trade that did not go well for bond bulls, as bonds fell hard and rates pushed sharply higher.

Turning the page forward 10-months, the majority feel like the Fed will raise rates. Does the indicator agree with the crowd at this time? The TIP/TLT ratio hit 6-year falling channel resistance at (2) in March of this year and the ratio has continued to slip lower. The weakness the past 6-weeks has the ratio breaking below rising support at (3).

Was the rally in this ratio at (1) a signal that inflation is back or was the rally nothing more than a counter trend rally, in a continuing downtrend? If inflation is really back, one would need to see this ratio reflecting strength and breaking out of its 6-year falling channel.