For Growth to take place, this must hold, says Joe Friday

At the beginning of the year, it was easy to find people discussing the idea that reflation/growth was going to take place in the economy and many positioned portfolios accordingly. Now that we find ourselves at the mid point of the year, we wanted to take a look at an indicator that is pretty good at letting us know how the reflation theme is really doing. 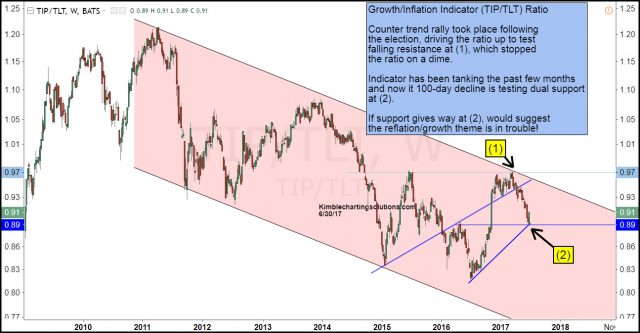 As the reflation theme was getting popular at the start of the year, the TIP/TLT ratio was hitting 2015 highs and 6-year falling channel resistance at (1).

Joe Friday Just The Facts– The reflation indicator stopped on a dime as it was hitting dual resistance at (1) and this is where portfolios should have been selling reflation assets, not buying them!

The swift decline in the ratio now has it testing dual support at (2). What happens at (2), will give investors a good look at really where the reflation theme heads. Now many are starting to question the idea of the reflation theme as this support test is taking place. As this support zone is being hit this week, yields have risen sharply and bonds have given back some of recent gains. 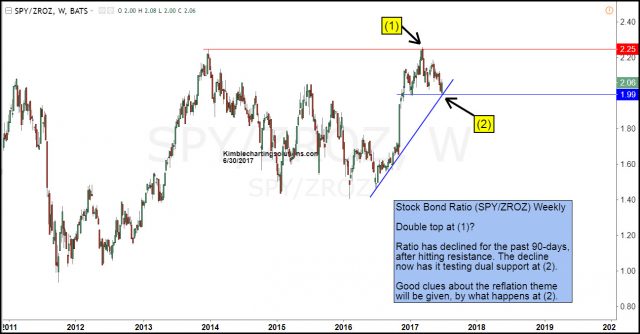 Joe Friday Just The Facts– The inflation indicator (TIP/TLT) and the Stock/Bond indicator (ZROZ/SPY) are both testing key support levels at the same time!

The Power of the Pattern suggests what both of the ratios do at these support tests, will send a quality message to investors about where portfolios should be positioned for the next 6-months.

If you would like to stay informed on these Power of the Pattern ideas and more, we would be honored if you were a member.

Wishing all of your a wonderful 4th of July weekend, see you after the holiday. Blessing to you and yours, Chris