Coffee Futures and Coffee ETF (JO) have had a rough go of it the past few years. Below looks at the performance of both since 2011 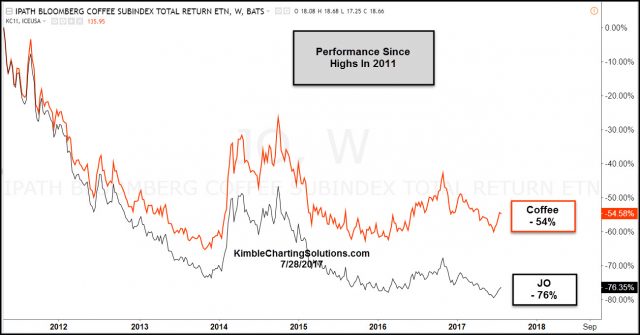 Could these large decline present an opportunity in Coffee? Sure could! Below looks at the chart of JO and what the Power of the Pattern finds interesting. 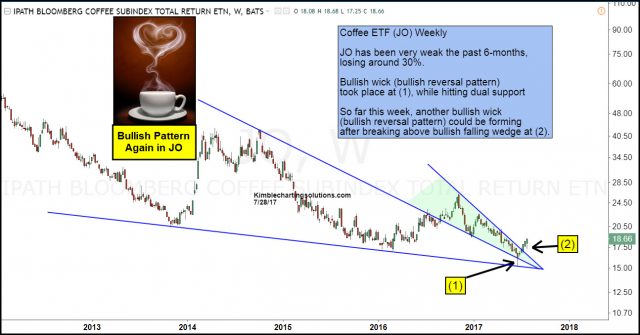 Over the past few years, the decline in JO took it down to test 4-year support at (1). While testing support line (1), JO looks to have create a bullish wick (bullish reversal pattern). This took place at long-term support AND at the bottom of a bullish descending triangle. The past few weeks JO has rallied and broken above bullish falling wedge resistance.

Just The Facts Ma’am– JO so far this week looks to be creating another bullish wick (bullish reversal pattern) following the breakout at (2).

This breakout is taking place with few investors bullish Coffee and dumb money traders have a huge short position in play, largest in years. A rally in Coffee has the potential to catch many off guard and could create a short covering rally.

No doubt the trend remains down in both Coffee and JO. Will see if two large bullish reversal patterns in the past 6-weeks are sending a short term bullish message or nothing more than a counter trend short-term rally.