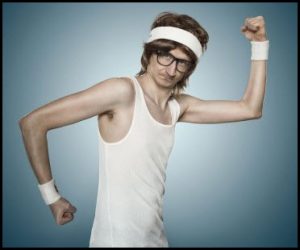 From 2011 to the start of this year, the US$ has been pretty strong, as it rallied nearly 30% in 6-years. Over the past 30-weeks, King Dollar has been rather weak.

Below looks at the US$ over the past 18-years, with 30-week performance applied- 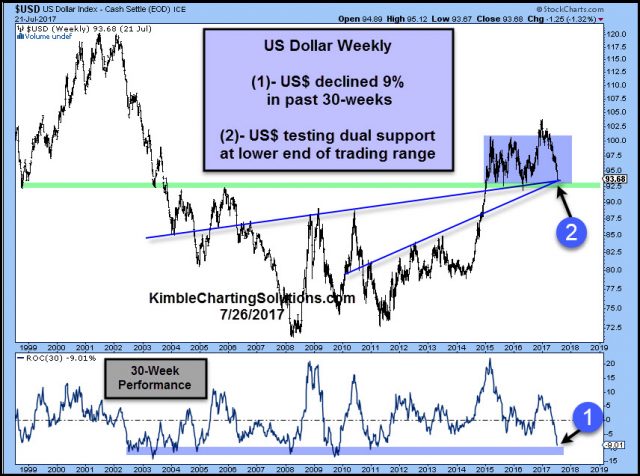 King Dollar has declined over 9% in the last 30-weeks at (1). As one can see, this sharp of a decline in 30-weeks hasn’t taken place a ton of times since the late 1990’s. The decline has the US$ testing the bottom of a 24-month trading range and two rising support lines at the same time at (2).

This decline has bullish sentiment towards the US$ at the lowest levels in the past three years, according to Sentimentrader.com, reflected in the chart below. 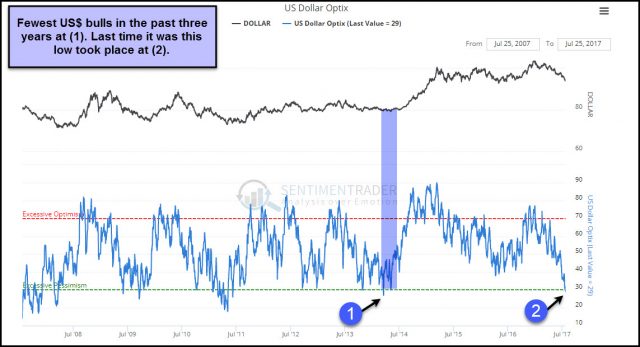 With few investors bullish King Dollar at this time and a triple support test in play after a rare 9% decline in 30-weeks, what the US$ does at (2) in the top chart, could become very important for the Dollar and many commodities.

Gold & Silver have not pushed much higher while the US$ has been very weak. This makes the price point in the US$, all the more important to the metals sector, if this triple support test would hold.