US Dollar breakout hard on Gold, Silver and Miners! 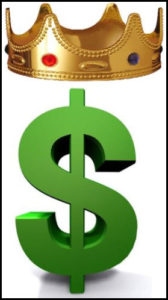 The US Dollar so far this year, has been very week, losing nearly 10% of its value. This decline might have influenced investors to go long the Euro. Below looks at sentiment towards the Euro, that we shared on our Twitter & Stocktwits accounts 9-days ago. 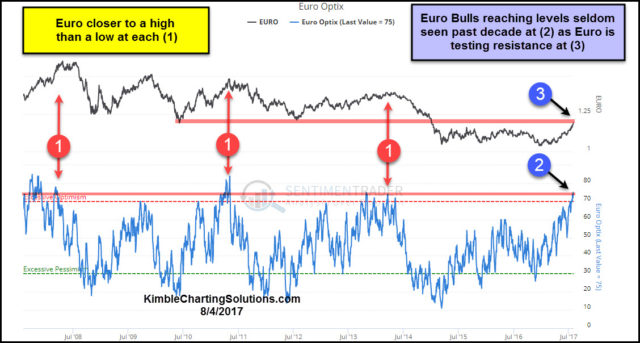 The chart above reflects that bullish sentiment towards the Euro is historically high and in the past when it reached these levels, it was closer to a high than a low. 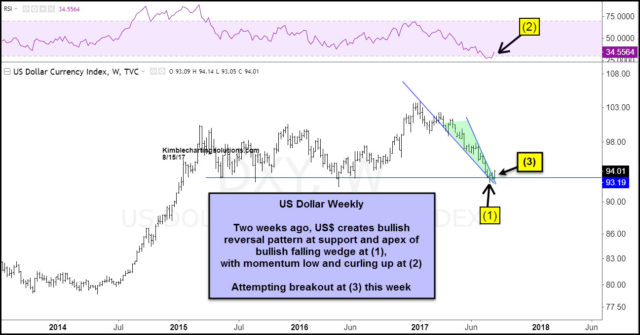 US Dollar while testing 2-year support level, also finds itself at the apex of a bullish falling wedge, where two weeks ago at (1) a large bullish reversal wick (reversal pattern) formed. This support test is taking place while momentum is oversold and attempting to turn up.

This week King Dollar is attempting to breakout above resistance of the bullish falling wedge at (3). A rally in the the US$ here and decline in the Euro, could put downward pressure on Gold, Silver and Miners!

Due to this pattern, Premium Members went long long the US$ near the start of this month, with a stop just below the apex of the bullish falling wedge.