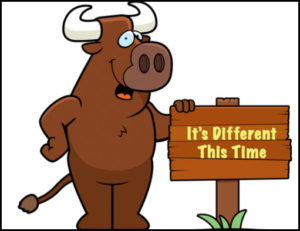 Interest rates based upon the 10-year yield (TNX) have been heading lower for years, more than 25-years actually. Below looks at the yield on the 10-year note and reflects that an important and rare test is in play.

Yields on the 10-year note have remained inside of falling channel (1) for the past 25-years. In the past, as rates have come near or touched the top of this channel, they were actually peaking.

At the start of this year, rates hit the top of the channel and backed off. Over the past 10-months rates could be forming a bull flag pattern, just under the top of falling channel (1). Of late rates have risen at (2), bringing yields up to test long-term falling resistance again at (3).

What rates do at (3) should be big-time important for bonds, banks, utilities and other interest rate sensitive assets.

Rates have peaked and headed lower when they have hit long-term resistance for years. The BIG question for investors in many assets classes is…“Will It Be Different This Time!”