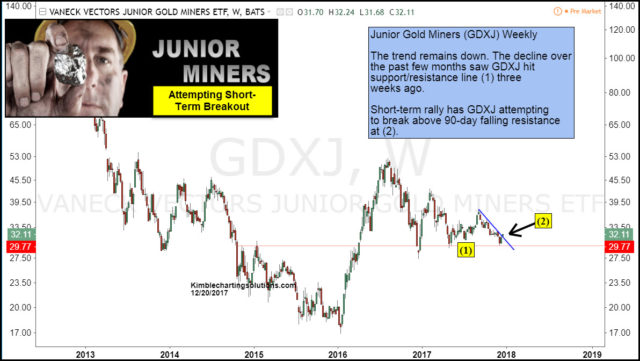 Senior (GDX) and Junior Miners (GDXJ) have had a rough go of it the past year, far underperforming the broad markets. No doubt about it the trend remains lower for each.

This decline over the past 14-months has taken GDXJ down to line (1), which has been support/resistance several times over the past two years.

GDXJ hit line (1) three weeks ago, where it created a small/bullish reversal pattern. The small rally of late has GDXJ attempting to break above short-term falling resistance at (2).

If a breakout takes place at (2), it could attract some buying pressure. IF this would happen, next key overhead resistance level comes into play at the $38 zone.