Banks about to fall apart at financial crisis highs? 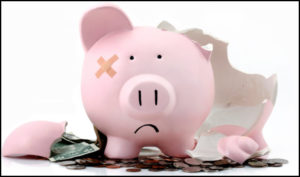 Banks started showing cracks back in 2007 and before long they started breaking support and fell hard.

The current bank trend remains UP at this time. The trend finds itself back at 2007 highs, where bulls would NOT want to see selling pressure start taking place!

The Bank Index peaked at (1) back in 2007, before a waterfall pattern started taking place. The index has formed a rising channel (2) over the past 6-years, where it is now testing the 2007 highs at the top of the rising channel at (3).

Are banks the only important index testing 2007 highs? Nope!

Similar to banks, the Semiconductor index is testing an important high from its past, where it started falling apart! SMH is now testing 2000 highs at the top of rising channel (2) at (3).

The trends for Banks and Semiconductors both remain up at this time and if they can breakout above 20007 and 2000 highs, would send a continuing bullish message.

With Banks testing 2007 highs and Semiconductors are testing 2000 highs, rising trends could get disrupted if rising support at each (4) would be broken to the downside.