Some times Junk bonds can give quality hints to the next short & long-term move in stocks. Junk bonds look to be sending both of those signals again. The next two charts share long and short-term perspectives and opportunities in the junk space.

In the early 1990’s I had been in the financial planning business for over a decade and I began noticing that a multi-year divergence to the stock market was taking place. The chart above highlights this multi-year divergence in the blue shaded area. The long-term divergence went on for years and didn’t seem to matter to most. Once support broke in 2000 by the S&P 500 at (1), the S&P and junk started correlating again. It appeared that junk had given a long-term heads up signal to where stocks were headed.

In 2013 it appears another divergence to the S&P 500 started, reflected by the blue shaded area. So far the 5-year divergence to stocks has NOT mattered to the stock market. Last week the S&P 500 hit 8-year rising support at (2), reflecting that the long-term trend and long-term support in the S&P remains in play, despite the divergence. 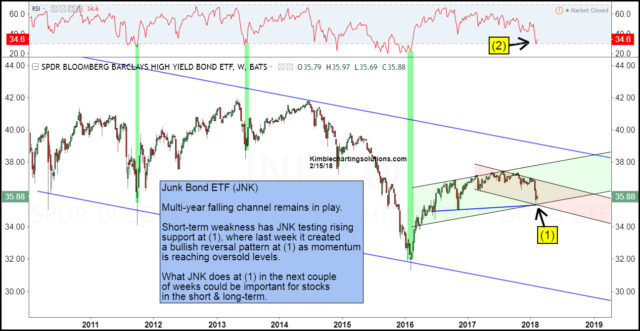 The trend in JNK remains lower as it has created a series of lower high and lower lows. Last week outflows from the junk space were the biggest in years. As investors were bailing out of junk, JNK was testing support at (1), where a bullish reversal pattern took place. As support was being tested, momentum was nearing oversold levels at (2).

Over the past few years when JNK momentum was oversold, it ended up being a short-term opportunity for traders. With the long trend in Junk being lower, what JNK does in the short-term becomes all the more important to Junk and stocks.

Keep a close eye on junk going forward as we feel it continues to give quality long and short-term perspectives and opportunities to what investors should do in stocks.

Next Wednesday we are conducting a a private briefing exclusively for our blog subscribers. We will discuss numerous opportunities in stocks, Metals and Crude Oil  Markets. Click HERE to register for the webinar.