I shared the chart below on Crude Oil in my Coffee with Chris email to members Saturday morning. This chart looks at Crude Oil over the past 20-years and highlights a triple test of resistance is in play along with a crowded trade.

Crude hit long-term support line (1) back in 2016 and a very strong rally followed. This rally took Crude of late up to its 38% retracement level of its 2002 lows/2009 highs at (2). While it was testing the 38% level it was also testing two falling resistance lines at (2), with momentum at its highest level in the past 7-years.

Crude is testing steep rising support at (3). This is a price point that Crude bulls would not want to see selling pressure get started.

Speaking of Crude bulls, a very crowded trade is in play below. Sentimentrader.com chart highlights positions by traders is at an extreme- 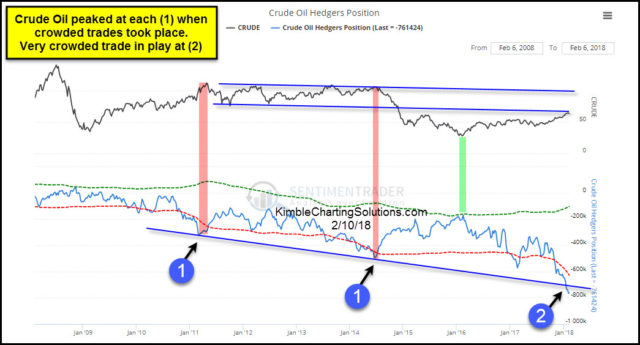 In time it will be interesting what Crude does with the potential resistance test at (2) in the top chart as traders might have a crowded trade in play at (2) above.