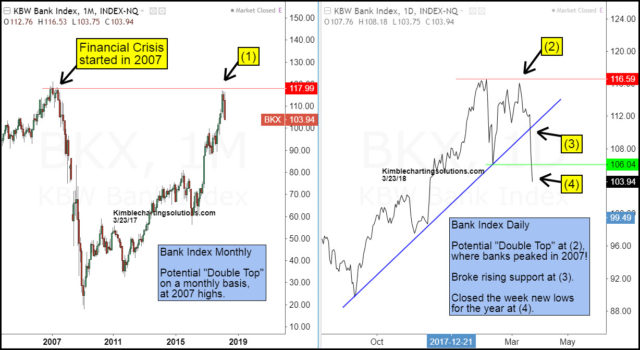 The 2-pack above looks at the KBW Bank Index on a long and short-term basis.

The chart on the left looks at the index on a monthly basis over the past 12-years. The rally over the past couple of years brought banks back to where they peaked in 2007 at (1). While touching the underside of 2007 highs at (1) last month, the bank index might have created a hangman pattern.

On the first day of March, we shared that several key markets in February might have created hangman patterns, that often takes place at historic highs… SEE HANGMAN POST HERE

The chart on the right above looks at the Bank index from a daily perspective. The index might have created a lower high at (2), which was the test of the 2007 highs. The weakness in banks of late has them breaking below 6-month rising support at (3) as they closed this past week at “new lows” for the year at (4).

Below looks at BlackRock on a Monthly basis- 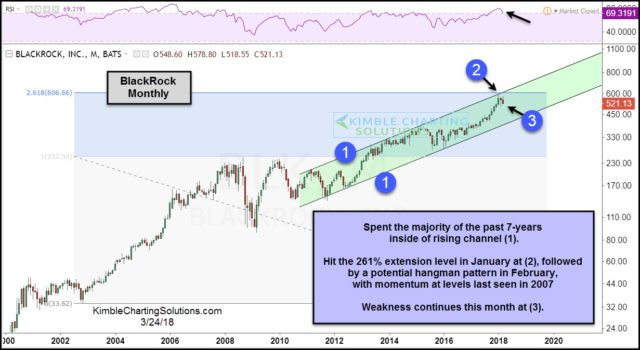 Might be worth keeping a close eye on BlackRock as it might have created a reversal pattern followed by a hangman pattern while kissing the underside of rising channel (1) at (2).

Below looks at JP Morgan on a Monthly basis- 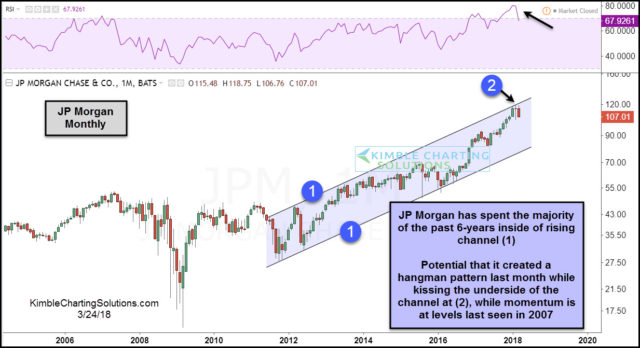 JPM potentially created a topping pattern last month, while kissing the underside of rising channel (1) at (2). This potential topping pattern took place as momentum was back at the highest level since the 2007 highs.

When banks started turning lower in 2007, they impacted the broad market in a big way. Tops are NOt proven at this time in the banking industry. If the Bank Index, BlackRock and JP Morgan happen to continue to be weak in the near future from these key levels, odds are the broad market could struggle to move higher.

Keep a close eye on banks going forward friends, what they do in the next few weeks could be very important!