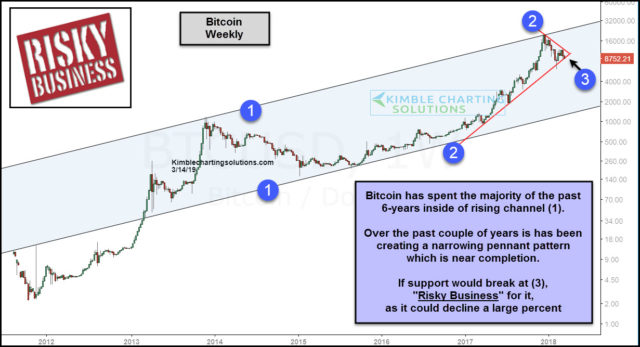 Bitcoin remains is a solid bull trend as it has spent the majority of the past 6-years inside of rising channel (1).

A couple of months ago it hit the top of the rising channel when it was trading around 20,000 and weakness started.

Over the past year, Bitcoin has been creating what looks to be a narrowing pennant pattern, characterized by each line (2), which is a series of higher lows and lower highs. Pennant patterns are NOT very helpful in suggesting the direction an asset will take when the pattern ends.

The pennant pattern is useful in suggesting that when it does end, historically a large move takes place. Bitcoin bulls need to keep a close eye on support line (2). Should it give way, selling pressure could really come forward and push it a large percent lower in price. Bitcoin bulls would receive outstanding news if it breaks above falling resistance line (2), as it should attract buyers.

Bitcoin bulls, risky business being long if support line (2) would break to the downside.