Above looks at 2 & 5-year yields over the past 30-years. The rally over the past couple of years has both of them testing 25-year falling resistance line (A) at each (1). While testing this long-term resistance, the insets reflect potential reversal patterns might be taking place this week.

While 25-year resistance is being tested, momentum is at levels seldom seen in the past quarter-century. In fact, rates were closer to highs than lows when momentum was this high in the past.

Below looks at the polar extreme in the rate world, Zero Coupon Bond ETF (ZROZ)- 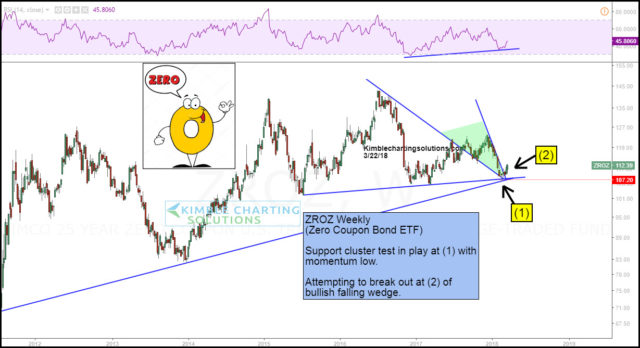 ZROZ tested dual support and the apex of a bullish falling wedge of late at (1), as momentum was low and possibly creating higher lows. Currently, ZROZ is working on a breakout at (2), which would suggest at least a short-term high in yields/lows in bonds could be at hand.

Full Disclosure- Members bought ZROZ a couple of weeks ago at it appeared to be attempting a bullish falling wedge breakout.