The long-term trend of Doc Copper remains down, as it has created a series of lower highs and lower lows inside of falling channel (1) over the past 7-years. It hit the bottom of the channel in late 2015, where it found support and a rally has taken place the past 3-years.

The rally now has Doc Copper testing the top of the falling channel, where a potential topping pattern (Head & Shoulders Pattern) could be taking place at (2), as momentum is lofty and could be turning down.

Joe Friday Just The Facts– Doc Copper could be creating a topping pattern over the past year, at the top of this long-term falling channel. 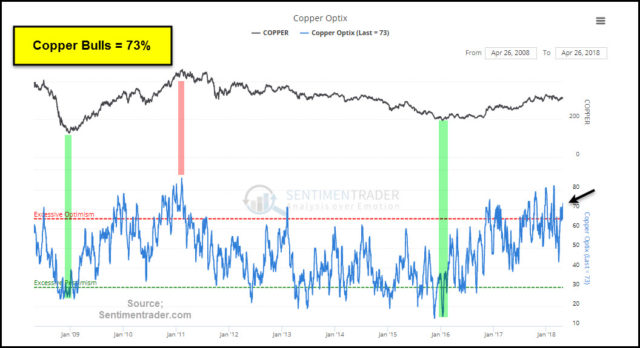 While Doc Copper it testing the underside of its long-term falling channel, bullish sentiment is high, near the levels hit as Copper topped back in 2011, according to Sentimentrader.com.

Interest rates/yields have followed Doc Coppers price pattern over the past few years, as both hit channel support in 2015/2016-

What Doc Copper and Yields do at the top of the channels could tell us a ton about inflation,  growth prospects, interest rates, and the future of commodity prices going forward!