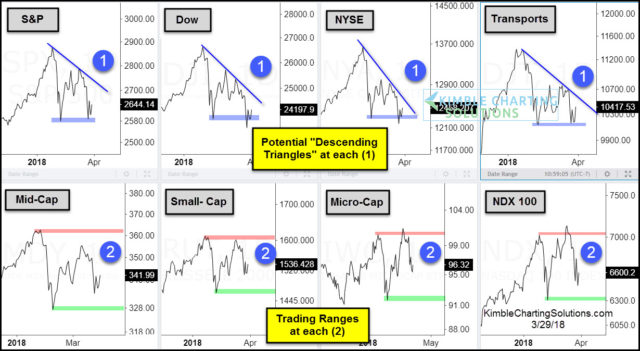 The first part of the year got off to a great start, not so much as the first quarter of 2018 came to an end. The above 8-pack looks at numerous indices in the states and highlights the patterns created in the first quarter.

First off, from a long-term perspective, the softness in the first quarter did not break the long-term bullish rising trends in each of the indices above.

From a shorter term perspective, the S&P 500, Dow, NYSE and Transports all could be creating “Descending Triangle” pattern at each (1). Around two-thirds of the time, this pattern leads to lower prices in the future. The key to these patterns is the blue support lines that were first created by the lows that took place in February. At this time support is support until broken.

If support would happen to not hold, the “measured move” of each descending triangle would suggest that these important indies would decline at least 10% below the lows of early February.

90-days from now (end of the 2nd quarter), market prices could be greatly influenced by these support lines!  Bulls would love to see these support lines hold and falling resistance is taken out to the upside. If this would take place, it would break the influence of these potential descending triangle patterns and indices would continue upward trends.

Below looks at the Semiconductor Index (SMH), which has rallied twice as much as the S&P 500 since the 2009 lows.

SMH monthly created large reversal patterns at each (1) and much lower prices followed. SMH finished last month with a large bearish reversal pattern at (2), at the same level as it peaked back in 2000.

Where stocks stand at the end of this month and at the end of next quarter, could be highly influenced by the descending triangle patterns by major indices and what SMH does at 2000 highs at (2).