The top chart above highlights that the Dow has spent the majority of the past 70-years inside of a rising channel.

The bottom chart highlights that the 10-year yield has spent the majority of the past 25-years inside of a falling channel.

Support is support until broken and both are testing short-term support lines at each (1).

In the short-term, it would be “bad news for the Dow” if both broke below support at the same time at each (1).

The Dow and S&P could be forming the pattern below, which is a “Descending Triangle” pattern 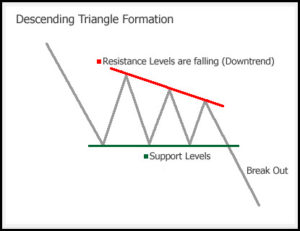 With the Dow and 10-year yields testing support near the tops of 70-year and 25-year channels in the first chart and the Dow and S&P testing support at each (2) in the second chart, if these support lines would break to the downside, don’t be surprised if selling pressure picks up.