Gold Bugs; Would Love This To Be A Double Top!

One of our favorite ratios to monitor for Gold Bugs is the U.S. Dollar/Gold ratio. It tells us when the Dollar is weakening or heading lower (which is good for gold) or when it is strengthening or heading higher (bad for gold).

Looking at the Dollar/Gold chart below, we can see that the ratio climbed higher from late 2011 to early 2016. This wreaked havoc on Gold prices. Since peaking in early 2016, the ratio has formed a broad declining channel (pink shaded area). Each swing lower has provided a tailwind for Gold prices, while each counter-swing higher has been a headwind.

in early 2018, the ratio tested the bottom of the channel before reversing higher and strengthening throughout much of this year. This move back toward the top of the channel has kept Gold prices subdued this year.

The U.S. Dollar/Gold ratio may be forming a “lower double top” just below falling channel resistance at (1). And each of the prior highs has coincided with momentum peaks (top box of the chart). As you can see, momentum looks to have peaked once again… and may be rolling over.

The Takeaway: Gold bugs would love to see a double top bearish reversal at point (1) on the U.S. Dollar/Gold ratio. This has NOT been confirmed just yet, but the ingredients are there. Stay tuned! 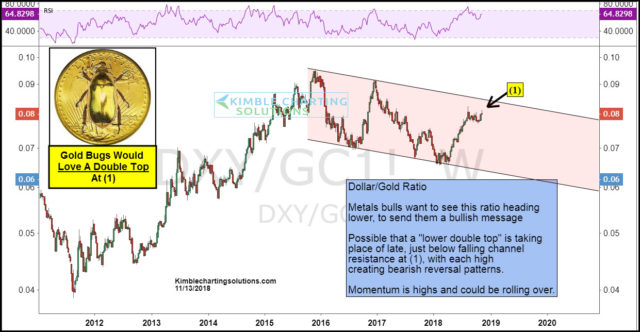