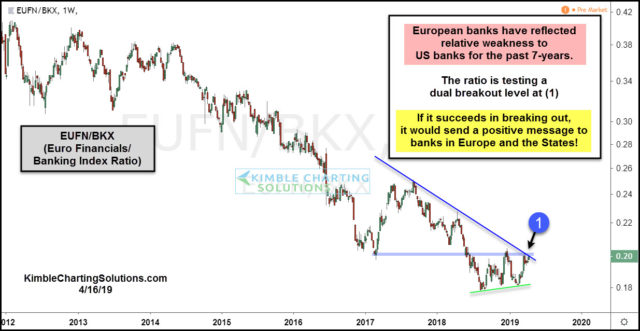 Banks in the states (BKX Index) have little to brag about over the past year, as they are have underperformed the S&P 500 by nearly 14%.

European banks have even less to brag about, as EUFN ETF has lagged the BKX index for the past 7-years! Is the underperformance of European banks to banks in the states about to end? A big test is in play right now, that could tell us!

The chart looks at the EUFN/BKX ratio over the past 7-years. The ratio reflects relative weakness by European banks, as the ratio has created a series of lower highs and lower lows.

The ratio this week is testing falling resistance and the 2017 lows as resistance at the same time at (1).

If the ratio breaks above dual resistance, it would send a short-term positive message to banks in Europe over banks in the states. Stocks in Europe and the states most likely would like to see this breakout take place.

What happens at (1) could be important globally. Keep a close eye on what this ratio does the next few weeks!